HEDGES OF PROTECTION FOR YOUR MARRIAGE 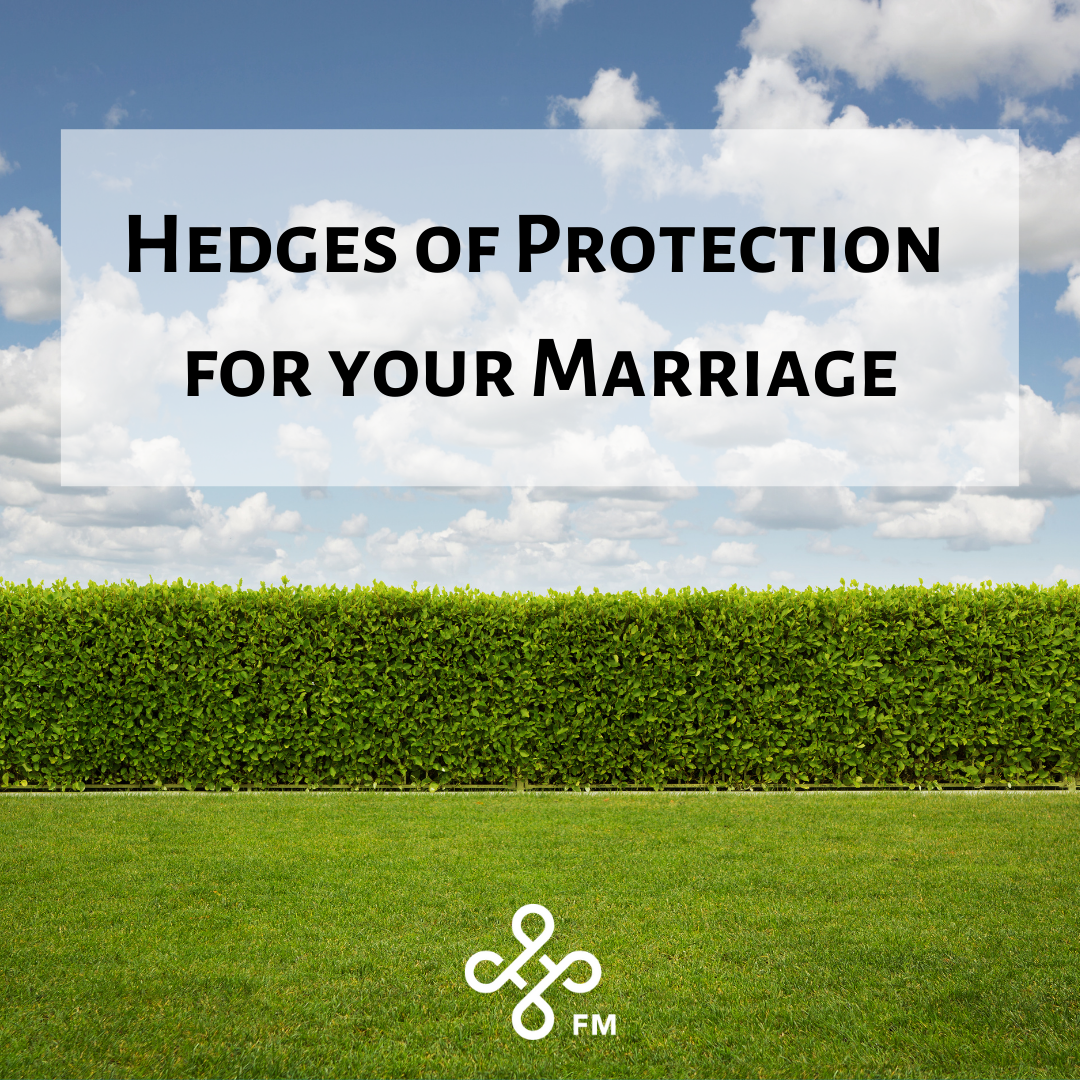 Since the early years of our marriage, I never would promise Dawn I would not have an affair.  In my mind, that could potentially give her false hope I would never let her down through relational betrayal.  I wanted her hope to be in Christ Jesus and not in me (Colossians 1:27).

As you would imagine, this created a great deal of insecurity for her.  Yet, with the passing of time since we married in 1987, what I have given Dawn is the assurance that I will do everything in my power to prevent being in a compromising situation sexually.

Years ago, I read a book by Jerry Jenkins entitled Hedges: Loving Your Marriage Enough to Protect It.  The principles outlined in that book forever shaped my view of loving Dawn and our marriage enough to protect them both.

As his evangelistic ministry began to achieve national popularity in the late 1940’s, Billy Graham and his team famously crafted what has come to be known as the “Modesto Manifesto.”  In the manifesto, Graham outlined a strategy to keep he and his ministry above reproach financially and sexually.

Philippians 2:15 teaches that you and I are to, “prove (ourselves) to be blameless and innocent, children of God above reproach in the midst of a crooked and perverse generation, among whom (we) appear as lights in the world.”

If we are to be “above reproach...and...appear as lights in the world,” we believe we must each have our own Marriage Manifesto that we function from to ensure the fidelity of our covenant commitments.

Dawn and I believe that we should fiercely protect our marriage.  Below are 8 “hedges of protection” we have placed around ourselves to protect the fidelity of our marriage.  This is our Marriage Manifesto.

If you’re married, we encourage you to incorporate similar “hedges” in your marriage…

8 “Hedges of Protection” to Place Around Your Marriage

1.      Be cautious of riding in a car alone with someone of the opposite sex.

Though it may be purely innocent, you never know who’s in the car beside you.  Gossip travels faster than good news.  It’s better to be safe than sorry.

You’ve probably passed someone on the road before and thought, “That was ______.  Who was that in the car with them?”  Why put yourself in a situation where others will ask that question about you?

2.     Be discerning about eating alone with someone of the opposite sex.

Similar to being in a car alone, you never know who you will run into in a restaurant.  All it takes to soil your good reputation is for a rumor to start.

Further, sharing a meal together lends itself to heightened closeness.  It’s not uncommon for conversations to become more intimate over a meal than in most any other situation.

After over 25 years of working with hundreds of couples, we have all too often seen how meals with someone of the opposite sex became the spring board for an adulterous relationship.

3.     Never meet alone with someone of the opposite sex.

This seems to be pure common sense to us.  In situations such as this, any accusation made against you would come down to your word against theirs.  Don’t put yourself in that type of situation.

Why place either of you in a position of possible temptation?

4.     When traveling alone, have an accountability system in place.

In the fall of 2012, I flew to Detroit to lead a small groups conference.  Dawn had taken me to the airport Friday morning and was going to pick me up Saturday night.  I was not going to be gone more than 36 hours.

After I got to Detroit, I went to Starbucks to work on my notes.  While sitting outside, I noticed out of the corner of my eye a lady walking from a nearby hotel.  As she passed in front of me, my eyes caught her eyes.  I distinctly remember thinking in that brief moment, “If she propositioned me, would I turn her down?”

The fact that that thought even ran through my mind scared me senseless.   After all, I love my wife.  We are very happily married.  How could I think something like that?

I quickly closed my laptop and left to go eat dinner.  Over dinner, I called my accountability partner, Robert Puckett, to tell him what had just happened.  He literally stayed on the phone with me until I finished dinner and was headed back to the hotel.

Now, notice with me, what (by the grace of God!) did I do when temptation presented itself?  Did I stay there and flirt with it? No! I fled!  I did exactly what Paul instructed young Timothy to do when confronted with temptation - to “flee from youthful lusts…” (2 Timothy 2:22).

Paul didn’t tell Timothy to stand around and flirt with temptation.  Nor did he tell him to stand there and fight like a man.  He told him to “flee from youthful lusts!”  That’s what we have to do.  There’s no better plan to protect our marriages.

From my Detroit experience, I quickly learned I am one dumb decision away from stupid.  I am not above doing something really dumb.   I gravely need accountable systems to keep me from straying.

My hunch is that you’re no different.  You, too, need an accountable system in place.

What is your system of accountability?  Who will you call when temptation comes (because it is coming!)?  Make sure to make the call as temptation strikes, not after you’ve fallen prey to it.

5.     Be cautious of social media interactions with others of the opposite sex, especially former “flames.”

From time to time, we hear individuals who swear off social media for how evil it is.  We have learned this – social media is not evil, it simply provides a platform to display the evil that is within people’s hearts.

Jesus said, “For out of the heart come evil thoughts, murders, adulteries, fornications, thefts, false witness, slanders. These are the things which defile a man…” - Matthew 15:18,19

Social media has done nothing more than to demonstrate to each of us what is within our hearts.  If you know you are susceptible to temptation through social media interactions, by all means, place “hedges” around yourself.  Limit your interactions.

In today’s “wired” age, there is a much shorter path between sexual temptation and the fulfillment of sin.  Sin, for many of us, is merely a click or two away.

Secrets may be great to throw surprise parties or to purchase a gift someone has longed for.  But, beyond that, we’ve found little (if any) good that comes from keeping secrets.

In covenant marriage there is to be no secrets.  Through covenant we are one.  Therefore, we vow to give one another free and unhindered access to each other’s lives.  Nothing is hidden.

Jesus said, “For nothing is hidden, except to be revealed, nor has anything been secret, but that it should come to light.” - Mark 4:22

If you’re trying to keep secrets, it’s only a matter of time before Jesus allows them to be revealed.  We encourage you to give your spouse the password to your financial and social media accounts.  Share joint bank accounts with each other.  Keep no secrets from one another.  Do whatever it takes to protect you and your marriage.

7.    Be Mindful of Affairs of the Heart (Emotional Affairs)

In his book, “The 5 Love Languages,” Gary Chapman discussed the “tingles.” Tingles are what you and I may experience from time to time with someone of the opposite sex that is not our spouse.

Tingles often arise innocent enough through prolonged interactions with another person.  It may be from a close working relationship at the office, serving together on a church or civic team together or some other natural interaction of life.

The key is to be mindful of the tingles. For most, it’s not a question of if they will happen but when they will happen.  When and if they do, here’s what we recommend...

Once you have this accountable system in place, bring the “tingles” you are feeling to the light with your accountability partner.  Paul teaches, “But all things become visible when they are exposed by the light, for everything that becomes visible is light.” - Ephesians 5:13

Confession and prayer with your accountability partner will be the most helpful aspect for you (James 5:16).

“Be sober-minded. Be watchful. Your adversary the devil prowls around like a roaring lion, seeking someone to devour.” -  1 Peter 5:8

To be “sober-minded” is to be able to see things as they are and to have control of your ability to discern right from wrong and make decisions accordingly. While there may be many things that can challenge our “sober mindedness,” the predominant culprit we see is alcohol. We’ve counseled numerous people who did or said things while under the influence that they would not have done or said otherwise.

Proverbs 20:1 states, “Wine is a mocker, strong drink a brawler, and whoever is intoxicated by it is not wise.”  As we see from Solomon’s exhortation, our wisest decisions will not likely come when we’ve lost our sober-mindedness.

These are our hedges of protection around our marriage.  What hedges do you and your spouse have in place to protect your marriage?

We’ve found as we work with nearly/newly married couples, the thought of needing such hedges seems a bit sad and disappointing to them.  Afterall, they love and trust their spouse.  Why would either of them have to take such drastic measures?

We totally understand that sentiment.  It makes perfect sense.  However, we encourage them to think of these hedges as a necessity, not because they don’t trust one another, but instead to protect the trust they do have for one another.

Here’s the stark reality, once trust has broken because of a breach of one or more of these hedges, we can guarantee you that these hedges and possibly even more will be insisted upon by the one who has been betrayed.  It’s better to put these hedges in place while trust is still in place.

Why not put these hedges in place now before you have to put them in place later?  If these are not your ‘hedges’, what are your ‘hedges’?

Please don’t fall prey to the thought that you don’t need hedges.  If you’re like us, you too are just one dumb decision away from stupid.